Showing posts from May, 2013
Show all

By Vaibhav Maheshwari - May 18, 2013
you know how the images in harry potter's newspaper come live and keep looping ... well it is just that somehow print media {in muggle's life :P} is more and more text , and the content is just not  "live" enough... well ,i had this crazy idea why not create a data image which can be printed and when scanned , it could stream that data to your mobile .. as if making an image as DIGITAL DATA! , it could be used everywhere :- textbooks,newspapers, magazines,printed advertisements,official files .. just everything... the idea is to store some MBs of data in an image (with certain parameters listed below) ... when scanned that image turns into digital data and could be browsed through mobile .. i am calling this project "dmage" code-named as finale and will basically include creating a mobile application. the main image will be divided in something known as cells. the following would be the parameters of data input from image the color code of the cel
Post a Comment
Read more 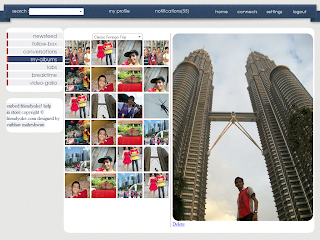 Friendyoke is shutting down! {not that it started} , but basically i am leaving/quitting this project for now. Here are some screenshots for the great social networking website ..:)
Post a Comment
Read more
More posts